That algorithm is solved with a very common tactic on algorithmic challenges called the “Sliding Window” technique/pattern. But what is that?

The sliding window pattern consists in create a range, with beginning and end, that your answer is easily processed there. In our case, we will create a sliding window (a range of characters) that embraces our answers, and for each one of the new characters, we can compute if the window is still valid.

The painting I chose is called Still Life at the Open Window by Juan Gris, 1925.

Juan Gris is recognized along with Pablo Picasso, Georges Braque, and Fernand Léger as one of the four major figures in Cubism, the avant-garde 20th-century art movement that revolutionized European painting and sculpture. Gris was born in 1887 in Madrid, where he later studied engineering from 1902 to 1904.

I chose this painting because as we are talking about the sliding window pattern, how about a cubism painting about windows?

Given a string s, find the length of the longest substring without repeating characters.

Today we will solve the leetcode problem number 3 in Swift. This is not a trivial medium problem. At first, looks simple but you will see that we will have to use some tricks to get this done. First, let’s describe the pseudo-algorithm of the sliding window solution.

And looks a lot, but in code is not that hard. I would say medium difficulty.

Now you know why the name of the pattern is sliding window.

A visualization of this algorithm for the string “ABCADK” would be: 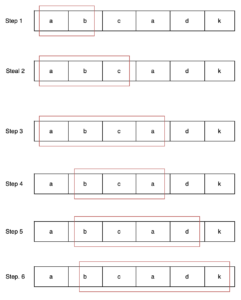 Observe that the red is the window, and it shrinks and grows conforming to our algorithm goal.

There are two types of problems with sliding windows, fixed windows, and dynamic windows. Our problem is the type of dynamic window because we don’t know what would be the window size.

If you don’t like the sliding window pattern, you can solve it using dynamic programming. With DP you can save the last valid start position and calculate your longest based on start position only. Check the solution below:

Also solves the problem, with even fewer lines of code.

Working with arrays is not enough to get through the algorithms interviews in big techs, you also have to know linked lists. And to practice that you can try the odd even problem in this article. We study there how to manipulate a linked list separating its parts without the need to create an additional data structure.

Studying the basics is never a waste of time, and nothing more ground knowledge than the classic merge sort algorithm in Swift. In this article, we explore one way to implement that legendary algorithm in Swift and how you could improve a little bit your knowledge of divide and conquer algorithms.

Today we check two solutions for a very common problem in Leetcode. One uses the sliding window technique and another one uses dynamic programming. Study both and see which one your brain adapts the best. The sliding window is a powerful technique to have in Swift algorithm interviews and today we studied one of its classic implementations of it.

Fellow developers, that’s all. I hope you liked reading this article as much as I enjoyed writing it. If you want to support this blog you can Buy Me a Coffee or just leave a comment saying hello. You can also sponsor posts! You can reach me on LinkedIn, or Twitter or send me an e-mail through the contact page.