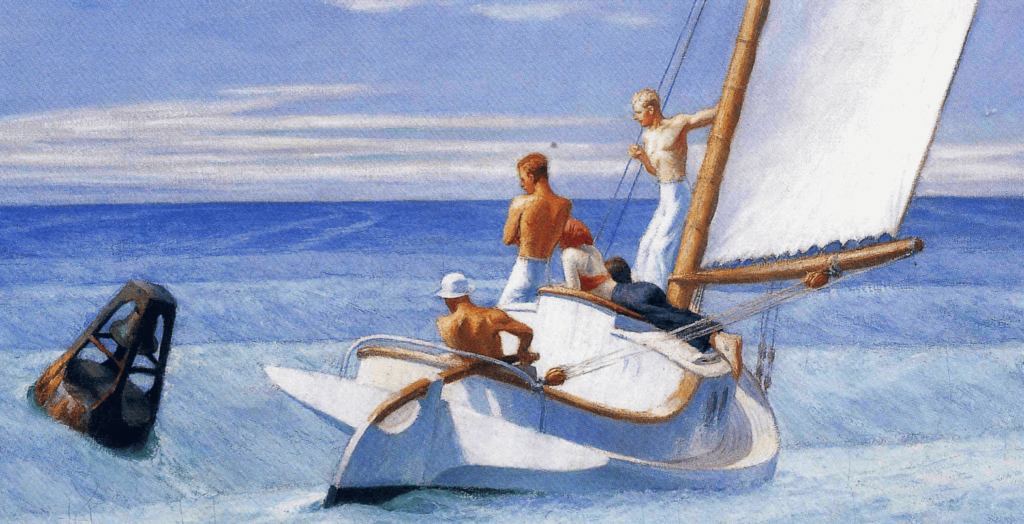 The problem involves we apply the adding operations to two linked lists. It is not a complex problem but you should know how to traverse a linked list to solve it. Keeping the actual reference to the list and making operations on each node is crucial to anyone who wants to solve linked list problems.

With that in mind, we will tackle this difficult medium problem today

The art today is an 1939 called Ground Swell by Edward Hopper.

Edward Hopper was born into a middle-class family in NY a hub of transport and industry at the time. The boy was already serious about his artistic ambitions at the age of 10 when he started to sign and date his drawings. In 1905, Hopper began working as an illustrator for a New York City advertising agency. He never really liked illustrating and longed for the freedom to paint from his imagination. Unfortunately, success was slow in coming and he was forced to earn his living as an illustrator for nearly 20 more years until his painting career took off.

I chose this painting because today we will talk about math and believe it or not, sailing involves a lot of math.

You are given two non-empty linked lists representing two non-negative integers. The digits are stored in reverse order, and each of their nodes contains a single digit. Add the two numbers and return the sum as a linked list. You may assume the two numbers do not contain any leading zero, except the number 0 itself.

The problem we will solve today is Leetcode number 2 problem. That involves you adding all the values from two linked lists that look like the mathematical addition operation.

Observe the image below: 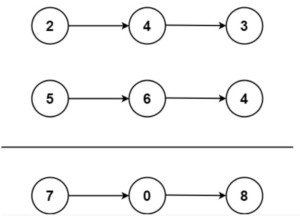 How would you start to tackle this problem? Would you transform to int both of the lists? But what if the number couldn’t be handled by an Integer?

First, let’s write down the pseudocode for solving this problem. Step by step you can observe that actually are a lot of simple steps combined.

That’s it! If you pay attention are a lot of steps but each of them is not complex.

Now check the Swift solution below:

The Time Complexity is O(N) where N is the linked list with the bigger length. Because we need to traverse each at least one time each value this time complexity can not be reduced.

The Space Complexity is also O(N) where N is the linked list with the bigger length. We are creating a new linked list with the result of the addition of the two input lists. Maybe you could create an algorithm that uses one of them as a result? That would save a lot of memory making it O(1).

String manipulation in Swift is not easy, that’s why you should always practice with problems that involve Strings. One of the most classics is this solution for the palindrome problem, checking that article you will solve a special kind of palindrome where both words end up with the same character.

Using languages feature can be good leverage for your code interviews, that’s why I wrote this article where we study how to solve an algorithm problem with just functional programming Swift language features. Functional programming can be hard, but once you get a grasp on it, you will start to see things differently.

The problem today involved a little bit of math and a lot of linked lists traversal. The big thing about this algorithm is just kept controlling when you should add or not 1 to the current sum. Traverse linked lists are a very important skill to have when solving algorithms problems and you should not overlook those.

Remember that studying linked lists also helps your brain to deal with nodes and references that is exactly what you do when you do graph problems.

Fellow developers, that’s all. I hope you liked reading this article as much as I enjoyed writing it. If you want to support this blog you can Buy Me a Coffee or just leave a comment saying hello. You can also sponsor posts and I’m open to freelance writing! You can reach me on LinkedIn or Twitter and send me an e-mail through the contact page.