This will be a very long and interesting(I hope) post because the subject today is... Architecture, more specifically coordinator pattern. The coordinator pattern comes to help the situation where you need to decouple the flow of your app from your view controllers. This seems awkward at first because the view controller need to how what to call, e.g. you have a Home screen that need to go to Cart screen this way the Home screen need to know at what to call but it doesn't need to know HOW to call, and there is when the coordinator comes handy.

This article will solve a very very specific problem that we had and maybe this could be used by others. The problem involves tab bars , coordinators and deep navigation between those. And a little disclaimer is needed: this isn't intended to be a final solution or the best/most abstraction of this pattern, this is only something that solved a problem we had and it will always be a working in progress like everything in programming (well at least not the @frozen swift's APIs ones).

Take this post as inspiration(or not) for your future architectures and it's ALL open to debate. That said...

The painting chosen to be represent this is The Stole Kiss (1788) from Jean-Honore Fragonard. This painting represents two things, the lovers on the left kissing in the backstage and the public social party on the right. Your ViewControllers never know what coordinators do behind the scenes, don't they?

Imagine that you have a tab bar with two tabs and each tab is a navigation controller. The Home Tab has 2 levels deep and the Orders Tab has 3 levels deep. The problem is to navigate from the second level deep view controller of home Tab to the 3 level deep Orders tab maintaining the hierarchical sequence of orders tab, this means that the return button should return to level 2 of level tab and so on.

First of all to visualize better the problem we are trying to solve look the picture below: 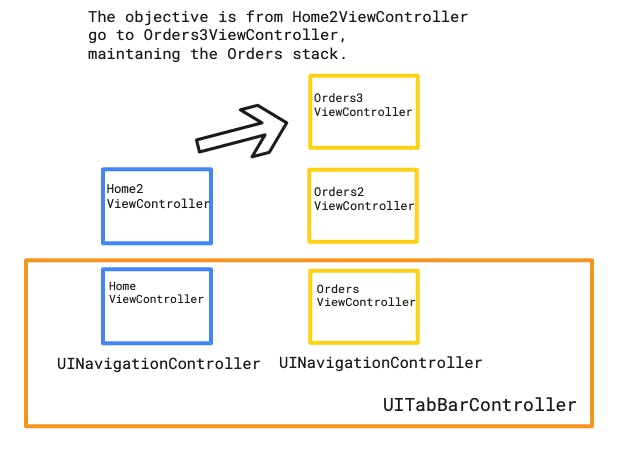 To solve this problem we will use coordinators with child coordinators. A important disclaimer is we won't be implementing the full strict sense of coordinators, if you want a deep dive into them just check this awesome blog post from the coordinator inventor and you will understand where we found inspiration to do ours coordinators.

That said it's easy to buy in the idea of using coordinator in your app. But how they look like? Our version is a very very simplified one but you can go full complex on coordinators adding the router pattern to it to like this lib. It's not our case.

Our parent and child coordinator will look like this: 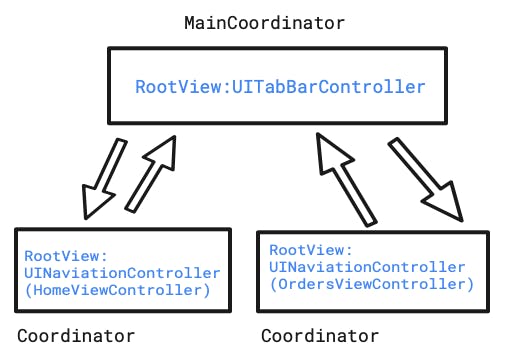 The first piece of our Coordinators Fiesta is the Coordinator itself:

Here we separate the the coordinator of it's parent because this way we have the possibility to create flows that doesn't envolves a viewController for its own. For example: we can have a DeepLinkCoordinator that only inherit the parentCoordinator and uses others available coordinators to make it flows ( like orchestrator pattern). The discardableResult and the Self will be discussed later on this post.

Here is where the magic begins to unveil. All these coordinators have function to work together to make possible go to any screen from anywhere. As the HomeBaseCoordinator and the OrdersBaseCoordinator have access to the MainBaseCoordinator via the Coordinator protocol, we can switch flows anytime we want.

And the last piece of the architecture are the HomeBaseCoordinated and OrdersBaseCoordinated protocols. Those are very important piece because they tell to the ViewController implementing them what flow they belong. So every time we add a new UIViewController to the app, we can assign one of those to guarantee that our flows are cohesive. The code below is they declarations:

This finishes all the protocols we need to work as protocol oriented as we can with this coordination approach. And now we'll start to implement all theirs concrete types so don't worry I won't let you hanging there alone with a bunch of protocols. The whole project is on GitHub if you want to rush things up but I think you will miss the fun parts.

First remove the main.storyboard and all references to it from the info.plist file. We will work with view code in this example. To fast remove just go to info.plist and use command+f shortcut to open find and search for Main, it will find the two occurrences and just click in the minus sign of it.

Now let's prepare the SceneDelegate to receive the MainCoordinator.start(), and it will be very very simple.

That's all we need to start our application flow. The beauty of this is that we can change all the application without event touch in the SceneDelegate. Great isn't it?

Let's create all the Support files:

Create a MainCoordinator.swift file and copy paste this:

Create a Coordinator.swift file and copy/paste this:

The extension is just syntax sugar for our coordinators. You don't need this if you don't like it. The @discardableResult and the Self is important because we want to be able of construct paths that are very readable to the future developers using the API. This approach let us to write: "coordinator.resetToRoot().goToCart().goToCheckout()" for example.

Create a file called MainCoordinator.swift that will be our first concrete type (yay) and copy/paste this:

Let's deep dive on this implementation:

Now just two more files and we are done with the Support Files:

Create a DeepLinkBaseCoordinator.swift and copy/paste this:

And the DeepLinkCoordinator.swift and copy/paste this:

The view files will be separated by flows. First let's create the home flow. Create a folder called Home and create other two folders inside it, Coordinator and ViewControllers.

Inside Coordinator folder create a file called HomeBaseCoordinator and copy/paste this:

This is a example how we can send data to another ViewController. The goToHome2ScreenWith function receives a title that will be used on Home2Screen. This is a way to do a command-query separation technique.

Create now a HomeCoordinator.swift that will conform to the protocol above:

This is very special, it's the answer for all this post we need to explain in detail:

The only remarkable thing here is that we are using the coordinator in the function goToHome2 to abstract the next screen at Mark 1. This makes our ViewController totally isolated from the app navigation logic. Very neat and clean.

Create a Home2ViewController.swift and copy/paste the following:

We will start now creating the other tab (Orders) views. Let's create the order flow. Create another folder in the root of the project called Orders and create other two folders inside it, Coordinator and ViewControllers.

Inside Orders-> Coordinator folder create a file called OrdersBaseCoordinator.swift and copy/paste this:

The return Self is required because we want to call function concatenation possibility when using this coordinator.

Create a file called OrdersCoordinator.swift and copy/paste this:

Nothing really special going on here. Just the function pushViewController being used to create the stack.

Nothing fancy just a plain old use of the coordinator injected in the init.

Create a Orders2ViewController.swift file in the same folder of the ViewController above and copy/paste this code:

That's it! You completed the coordinator pattern with tab bars! Congratulations! The result must be something like the gif below:

Today we've done our goal that was navigate between different tab bars, maintaining the stack and all with protocols! Again, this is not a final solution and it's just to inspire others.

If you prefer you can just go to my GitHub and clone the project to check it. But I strongly recommend you to read this to understand all the reasoning about the architecture.

This article couldn't be done without the help of my dear friends Lucas Serrano, Tales Conrado and André Faria .

That's all my people, I hope you liked this as I liked writing. If you want to support this blog you can Buy Me a Coffee or just leave a comment saying hello.

Hi buddy. Personally, I am very good at dating sites. Since recently I was able to find myself a boyfriend using dating sites. I signed up on this website dating hookup sites And a few guys wrote to me there. One of whom we started dating. Therefore, I have a great attitude to this site, because thanks to it I am happy.